We are born as a theatre research group in 2005 and from the beginning our activity focused on 4 different, but linked, fields: the production of shows, projects in the sociocultural field, educational activities and the organisation of events within the theatrical field.

At the core of our theatrical work is the research of an expressive language that can offer to the spectator the possibility to become the immobile object of an enchantment, witness of a unique and unrepeatable event, of a simple and sincere act. Our daily artistic work leads us to a research between rhythm and physical action, which generates the latest productions. Some of which are: Quotidiano scadere (Winner of the Prize Linea D’Ombra 2010), Senso Comune (finalist to the Premio Scenario 2011) and InCertiCorpi (winner of prize Premio Presente Futuro 2013, Premio Crash Test 2014, Premio del Pubblico CrashTest 2014). Alongside those productions we paid attention to Street Theatre with the shows Malaparata, Il Draago and Simurgh (2014 production) with many tours outside the national borders (Poland, France, UK, Serbia, Switzerland, Belgium and Taiwan). Music, stilts, giant masks, flaming sticks, theatrical machines and mobile sets. All techniques belonging to Street Theatre find space in our shows which are capable of gifting the audience with the enchantment of magic.

In 2016 we produced 3 new shows, Pentesilea (street theatre show with stilts actors), Il Gatto e la Volpe (kids show based on Le avventure di Pinocchio – Pinocchio’s adventures) and Angeli e Demoni (with inmates, students and actors of the Teatro dei Venti). We are currently underway with the production of a new street theatre show based on the Hermann Melville’s novel “Moby Dick”. 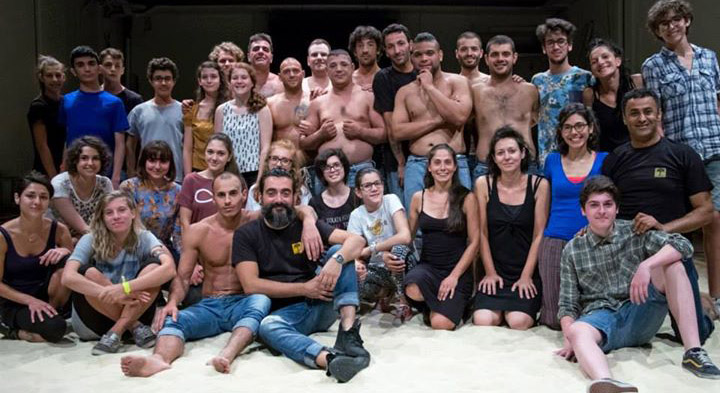 We are active in the social field with a permanent workshop finalised to the production of shows, in the Casa di Reclusione di Castelfranco Emilia (Castelfranco Emilia’s Prison) and, since 2014, also at the Casa Circondariale di Modena (Modena’s Prison). A fundamental experience was the one in the Prison accommodation for minors of Nisida, Naples (October 2009/ March 2010). We realise International Cooperation Projects (Mozambique, Serbia and Senegal) in collaboration with Emilia Romagna Region and Modena Council. Since 2009 we realise educational projects and artistic production in the Mental Health field in collaboration with the Department for Mental Health, the Local Health Department and Emilia Romagna Region. Since 2016 we are part of the FAIDRA Project, co-funded by the Creative Europe Program of the European Union, with the objective of creating a show based upon the history of internal migration within the European countries. In the field of education we hold permanent workshop for children, teenagers and adults, with projects for beginners and professionals. Some of the educational projects to highlight are: Workshop on the use of Stilts and the Seminar about Rhythm applied to physical action. The company is supported by Emilia Romagna Region under law 13/99; from the Modena Council for the project in Modena’s Prison; funded by the Minister for Artistic Assets and Activities as head of festival for the project Trasparenze within the Andante theatrical review; winner of the Funder 35 with the project Urban Theatre Experience.

It costs nothing to you, but for us it’s a support to various activities in the sociocultural field.

Scroll
We use cookies on our website to give you the most relevant experience by remembering your preferences and repeat visits. By clicking “Accept All”, you consent to the use of ALL the cookies. However, you may visit "Cookie Settings" to provide a controlled consent.
Cookie SettingsAccept All
Manage consent

This website uses cookies to improve your experience while you navigate through the website. Out of these, the cookies that are categorized as necessary are stored on your browser as they are essential for the working of basic functionalities of the website. We also use third-party cookies that help us analyze and understand how you use this website. These cookies will be stored in your browser only with your consent. You also have the option to opt-out of these cookies. But opting out of some of these cookies may affect your browsing experience.
Necessary Always Enabled

Any cookies that may not be particularly necessary for the website to function and is used specifically to collect user personal data via analytics, ads, other embedded contents are termed as non-necessary cookies. It is mandatory to procure user consent prior to running these cookies on your website.